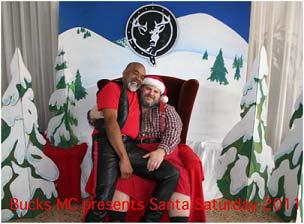 (Article as it appeared in the 2012 1st Quarter inFACT Newsletter)

On October 31, 1972, The Bucks Motorcycle Club was established in New Hope, Pennsylvania as an organization that would foster a fraternal atmosphere and provide opportunities to enjoy mutual fellowship through various social activities, such as motorcycling and raising funds to address various community needs. To that end, for 38 years as of 2011, The Bucks has held our annual charity event, Santa Saturday®, which draws over a thousand individuals raising funds to benefit HIV/AIDS and other local charitable needs. Santa Saturday® has become the oldest and largest East Coast leather charity event with funds raised donated to local area charities. To raise funds, the Santa Saturday® charitable event combines: an auction of donated items; entertainment by performers associated with The Bucks from around the region, including New Hope and Asbury Park; photos with The Bucks’ bear Santa Claus; a leather shop; a 50- 50 raffle; and refreshments and drinks. After expenditures, over ninety percent of the funds raised at Santa Saturday® in 2011 were donated to charities. Since relocating to Asbury Park, two thirds of the funds raised at Santa Saturday® have gone to the host community (Check-Mate, Inc. of Monmouth County, The Center of Asbury Park and the Visiting Nurse Service Association of Central Jersey). Until 2007 Santa Saturday® was held in New Hope. With the necessity for a larger venue and the need to reduce the expense of holding the event, The Bucks sought and, were fortunate to have found a suitable alternate space at the Paradise Bar and Empress Hotel in Asbury Park N.J. The Bucks, however, have not forgotten our New Hope roots and the Bucks County Area Agency on Aging has continued to be assisted over the years and, receiving a quarter of the donations this year. In addition, for the first time Fighting AIDS Continuously Together (FACT) was selected to receive a donation this year. We are very pleased that FACT of Bucks County has been added to The Bucks list of charities assisted. We hope to continue and build upon this new relationship with FACT in the future