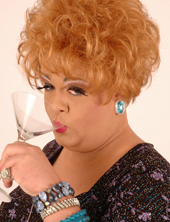 “Never doubt that a small group of committed people can change the world. Indeed, it is the only thing that ever has.” Margaret Mead……

By FACT Public Relations Person and Board Member, Cora Berke…..

I had the pleasure of interviewing Michael Gardner, best known as New Hope’s fabulous Miss Pumpkin, on New Year’s Day.  He was working at Jon and Peter’s where he has been for 4 years. They were having a Pajama Brunch and Michael was not only wearing flannel pajamas, but as always, his heart on his sleeve. He was working tirelessly after having worked at the Raven on New Year’s Eve, where he has also been on their staff for 23 years.

He grew up in Bucks County, Pa. in Tinicum Township and has lived in New Hope for the past 25 years, becoming an icon to everyone in town.  His involvement with FACT (Fighting AIDS Continuously Together) began when a friend asked him to help out at the Snow Ball to benefit the Lehigh Valley FACT chapter in Allentown, Pa. He said he has known and lost many a friend to AIDS and saw the need for FACT in Bucks County.

FACT began in Bucks County in 1992 to serve the growing number of people affected by AIDS in Bucks, Mercer and Hunterdon counties.  Anyone who attends the Bingos sponsored by FACT at the Eagle Firehouse in New Hope has had the pleasure of having Miss Pumpkin as the emcee. Michael has even had his mom and sister help out in the kitchen.  Not only does he volunteer for FACT, but also for LifeTies. LifeTies is an organization in Trenton, NJ which runs Triad House, the only home in New Jersey for abused and neglected LGBT youth. Michael said that on Christmas he has the kids write their letters to Santa, and then gets as many people as he can to help fulfill it.  The proceeds from the Raven’s Christmas show makes up for the rest, assuring every child gets their wish.  Michael does their Christmas show every year.

His energy is contagious and he said it’s the energy he gets from volunteering that is his favorite part; along with meeting new and interesting people along the way. I suspect the people who get to meet him are the lucky ones.                              Louis Licitra (President of FACT) states….”A long-overdue recognition and we at FACT appreciate all that Michael does for us and his great support of our organization and our community”